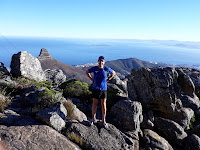 In truth I had been thinking about this for some time but was too lazy to act on my ambition. This changed when the Doc of Moove (aka Stuart Hutcheson) asked me if I could build a "hard-core" sandal. He wanted something that would work on extreme terrain and in bad weather.

Exactly what that meant was not clear. Does extreme mean more rock? More water? Almost certainly more mud ... and I hate mud more than the devil himself. I had a vague idea. I knew that our Yeti was more of an all-purpose tool. The Doc wanted something that would work well when the degree of elevation increased, when the surface underfoot was dangerously broken-up, when the risk of misplaced feet and incorrect weight distribution was very high. With the Cape winter looming I knew he was also keen to offer trail runners a product that made the outdoors more enticing in bad weather.
And so I started pondering the options.
Many years ago I made a sandal with a single lace looped through three anchor points. It had felt pretty close to wearing a shoe and I had discarded it because at the time I was aggressively pursuing minimalist design and anything that looked like it could be reduced or eliminated was reduced or eliminated. This early taught lacing system was needed now. It was robust and secure.

Another memory crossed my mind. In my library of failures (and marginal successes) was buried a sandal that I once built for the Magaliesberg Challenge. I used it for the 40km race and it's hyper sticky sole impressed me as well as countless other runners who I did not crash into, as we bounced across the ancient orange rocks of this mountain range. When I built this one-off sandal the tread pattern was so deep that I  had to use a surgical scalpel to trim each protruding lug from an estimated 7mm to about 4mm. It took a day of hard and erratic slicing but it worked well. The resultant tread pattern, a random matrix of rectangles, worked exceedingly well despite it's low-tech origin.


And so a plan emerged for Doc's hardcore Yeti, the Yeti X, as he already called it. I had an idea for a tread pattern as well as a robust lacing system.  The next question was how to actually build this Yeti X sandal. Could it be done? My first few attempts were unremarkable failures with one prototype turning out as hard as a surfboard.
In the depths of misery and close to the midnight hour I worked to fashion yet another new prototype this time using a combo of hard and soft polymer mixtures. I needed something to wear on a pending Cape Town visit and I was damned if I was going to Table Mountain without something to try. And luckily, the next Yeti X prototype emerged from the workshop. It was pretty good I thought ... it might actually work!
In the preceding weeks I had been sourcing heavy duty webbing and lacing fittings from the USA. I knew as I built my next prototype that it would be pretty tough.
Quickly I contacted my old climbing mate suggesting that he send me the Table Mountain Right Face route description (which I had long forgotten) because I now had a plan. Not only was I going to test my new Yeti X's but I was also going to recapture a moment of long past youth. I was going to climb Right Face in my new extreme sandals.

On the day that I arrived to climb this old classic route my plans were thrown into turmoil as I couldn't even find my way across the classic Right Face Arrow Face traverse which led to the rock climb I wanted to ascend.

Half way across the traverse I was stranded at a 12 inch wide ledge overgrown with stout bushes with a 150 meter drop to the side. There was no way I was going to navigate this narrow ledge in my Yeti X's while simultaneously doing some recklessly extensive gardening. Dismayed and turning back, I returned to the India-Venster route later making my way down Skeleton Gorge to Newlands Forest.

The next day I was back with Richard and with his help we got across the traverse. I had missed a small step upwards which led to an easy path across the expansive rock face. It brought home to me how easily mistakes can happen in the mountains even to those like me who regard themselves as pretty seasoned.

And so we got to the start of Right Face. Me in my new Yeti X's and Richard, by the way, in climbing booties and a chalk bag! "That's serious over dressing, Dude!"  "Not so" he said ... "I need to have a firm grip if I have to grab you and haul you up". And rightly so because the first step off the ledge was a damn tricky undercut pull-up to a crouching position below an overhang. Darn! Was I rusty?!!

It got better as we worked our way upwards, me sometimes taking a very long time to work out the most simple moves. Not only did I want to avoid falling off but I also wanted my sandals to do what I expected of them. We climbed higher and higher, at one point moving up the "Shell House" pitch named at the time after a tall building in the city center.


What an engaging and wonderful outing. This exposed rock climb (an easy one by any standards) tested my brain more than the Yeti X's as I struggled to work out very simple moves ... often above a 1000 foot drop. The Yeti X prototype performed!! Remarkably.

At one staged Richard asked "What if they break?"

The final Yeti X is now only a few steps away. I know what is needed. At least I think I know. It will work very well and while it might be a compromise between an ultra and a sprint sandal, it will definitely stick like glue to a hard technical trail and allow pretty rapid movement and a little extra confidence.


One more pic at the top for fun, before trotting down. 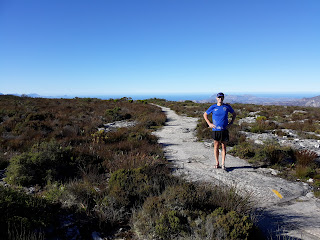 The Non-Definitive Guide to Running a Barefoot Marathon
July 20, 2020